I’ve only been using biotopic for two weeks and it amazing. I have a lot of new hair growth. I’d love to see what my hair will look like in a couple of months.

The gummies themselves are very good and I haven't noticed any difference yet really.

I love its, it works. Send me your phone number so I can order for my Pastor and myself.
Thanks

I’m almost finished the first bottle of regrowth plus and I see hair growth. I will definitely need a second but I’ve I feel there is value in speeding again. I have a bald spot near the parting of my scalp and I s

Works super well, beard got much thicker and is great for grooming the beard.

A
Biotopic® Total Regrowth System™ A.
Well I'll be..

Was using this stuff for a couple months now and I gotta say I'm Impressed. It was 3-4 weeks when I noticed I could see an outline of where my hairline used to be. Was extremely excited to see this because that meant the follicles were actually opening again. Now its 2 maybe 2 a half months in and I have new hairs!

It hasn’t worked for me yet but going to give it a little longer. Hoping to see some results

I actually love this product. I'm not sure if I'm seeing new growth but that doesn't matter. The way my hair now sits makes me so much happier. I've even been using it on my eyebrows and they're getting thicker. So happy. I struggle with having very thin eyebrows. Will for sure keep ordering.

It’s a great product I will Recommend this to anyone it works I will be ordering again. Ramon hodge 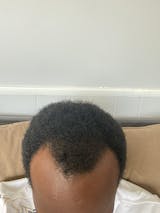 I have received my product earlier than expected! I started using week after having seen any results as yet will be updating on this product!

I am really thankful for the store's response to my first order being misplaced and resending my order. It was frustrating to lose my order at first, but I was really grateful to connect with Michelle who was extremely accommodating. Thank you!

Not sure if I have really noticed a difference, but love how the mint in the shampoo feels on my scalp.

I’m not sure if it really gave me much results at all because I wasn’t able to use it as long as I would have liked. The bottle is extremely small and the first few times you use it it’s almost as if it’s designed to shoot out more so you go thru it faster. It was shooting out multiple directions the first week and even with minimal, gentle pumps the bottle ran out extremely fast which I was very disappointed with...For the cost of it, the bottle should be larger and controlled with a dropper as opposed pressing a spray pump. I have used a similar style serum from a dermatologist with a dropper and it lasted me well over a month and was similar in price. It was disappointing it was finished before a full 30 days. I don’t have much of a balding issue just a bit of a receding hairline and thinning on the crown so I did not need much of it at all but the large sprays in the first week that hit the counter as well as the mirror due to the pressure of it sprayed out much more then needed. Im not spastic and know how to use a spray pump and don’t have hulk hands so I don’t think it was me just not functioning properly. Don’t know if I would be purchasing again as it’s pricey for such a small bottle...I gave it 3 stars because the shipping was fast, they keep up with you and ask for an honest review and I also like that it has no scent and doesn’t leave your hair greasy. Those few items especially customer servive and fast shipping sometimes make up for lack luster results. Give it a whirl.

Been using it for about month now. Beard is coming in fuller than it ever has before. Still a long way to go though!!